Previous articles spotted technologies showing significant potential for value creation. But what industries should Technology leaders focus on and with what offering? On a broader level, what innovation portfolio should growth-minded CEO build if they want to capture a large share of the $1210 Bn at stake? These questions address the more fundamental issue of resource allocation in a time when new revenue opportunities may :

Value : digital technologies to generate a $1210 Bn prize in 10 industries

Between 2000 and 2008, most novel developments originated from consumer-facing companies. Facebook, Apple, Amazon, Google created simple-to-use products, offering a superior end-user experience. In the coming years, most innovations should be more B2B focused, with manufacturing playing a prominent role. 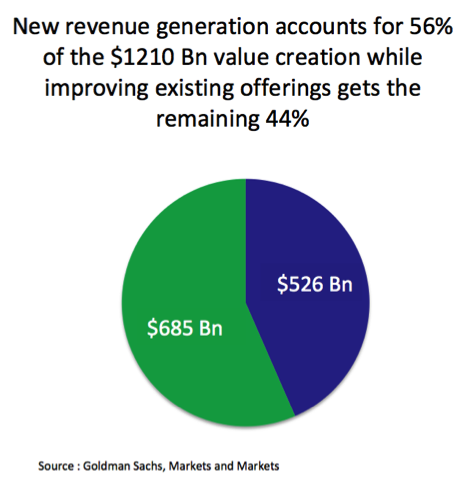 Optimizing industrial assets proves crucial. Production capital returns have remained low since 2008. But improvements, all across the value chains in multiple sectors, should enhance operational efficiencies, reduce costs, and raises capital gains, allowing for corporate profits to go to capital investment rather than buybacks and dividends. There should be a “bigger contribution from business investment to productivity growth in the next couple of years than there was in 2010 and 2011” according to Jan Hatzius, chief economist of investment bank Goldman Sachs.

On a broader level, innovation (defined here as new business lines based on a fresh supplier ecosystem, a functional business model and a leading-edge distribution network) should capture $685 Bn by 2025 while enhancing existing offerings should claim the remaining $526 Bn. In the words of the managing director of Innosight, an innovation consulting firm, Scott Anthony, companies should engage in “dual transformation” consisting in rejuvenating the old while creating the future, at the same time. Corporate innovation portfolios should be mostly made up of disruptive innovations while leaving room for incremental improvements—a subject Harvard Professor and founder of Innovation Consulting firm Innosight, Clayton Christensen and I discussed on several occasions a few years ago.

In any case, let’s look at how the $1210 Bn is distributed in each industry :

The manufacturing industry captures the largest share of newly generated revenue due to multiple technologies, including Smart factory, virtual and augmented reality and cybersecurity. Cloud-based enterprise resource planning is one of the most value-creating use cases in Smart Factory, reaching the $43 billion mark. Radio frequency identification (RFID) embedded chips ascertain asset location and improve supply across the production chain. Industrial robots are also promising applications. VR and AR require manufacturing capability to build the necessary hardware. Finally, cybersecurity has to do mostly with safe-keeping IoT communications and preventing data breach.

Finance to create $108 Bn in value

Government to open a $205 Bn opportunity

Artificial intelligence optimizes pricing and provides clues to predicting demand both in value and in nature, despite the vagaries of fashion. VR and AR technology applied to shopping offers a fresh alternative to existing online e-commerce. Ali Baba is already developing an end-to-end VR shopping experience: customers search for products, compare them with one another, identify the best price, and finally complete the payment, all through the VR.

Energy to host $43 Bn in value

There are multiple applications in the energy industry. One of the most original ones remains a blockchain-enabled smart grid system which is already in use in New York. Consumers producing their own energy—also known as Prosumers—sell or exchange it with their neighbors while a blockchain-enabled Smart grid authenticates transactions.

Education and healthcare to generate $59 Bn

Education has been at the centerpiece of the digital revolution particularly with the rise of massive open online courses (MOOC). Virtual reality offers a novel educational experience especially in fields where visualizing information proves crucial to the learning process, such as medicine, physics, astronomy and applied engineering.

Standing at 59 billion dollars in new value creation, the healthcare figure seems low. Reports used in these articles do not include IoT (Internet of Things) and Cloud. Yet, much depends on a combination of IoT, cloud, robotics and Artificial Intelligence. Artificial intelligence should bring greater research and development productivity in the drug discovery phases. Today, it costs over $1 billion to get a novel drug approved. The opportunity to demonstrate increased capital efficiency in the drug discovery process seems real.

To sum up: digital technologies to create value

In the following article, we’ll revert to a technology point of view and explore promising use cases.