To illustrate what how disruptive innovation works, I’ll be referring to 3 graphs. The first graph, below, plots product performance over time. 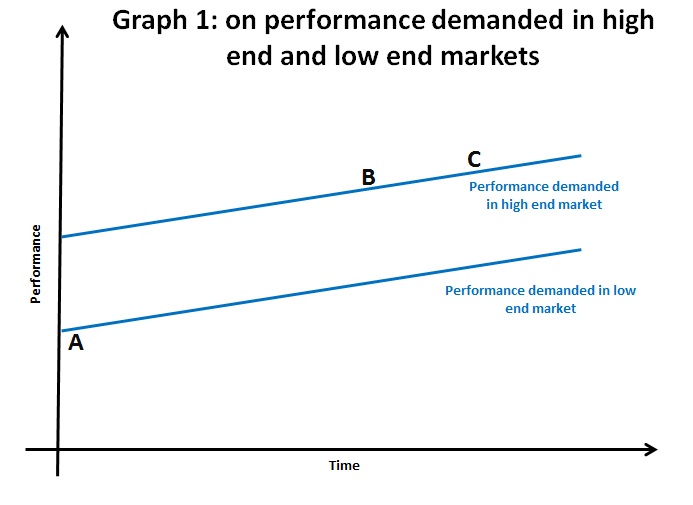 One of the most critical questions in understanding the nature of disruptive innovation is the meaning of performance. Performance is both relative to an industry and relative to a market segment in each industry.

For example, in automobile, performance may be defined as:

These are just some of the most prevalent definitions of performance in automobile, and there are surely many more.

Depending on the market segment you’re looking at some definition of performance may become more important than others. For example:

In the hard drive industry (also known as “disk drives”); performance criteria may vary as well. For example:

Understanding the different criteria of performance and their different rank order (that is how each criteria ranks against one another) helps to differentiate one market segment from another. 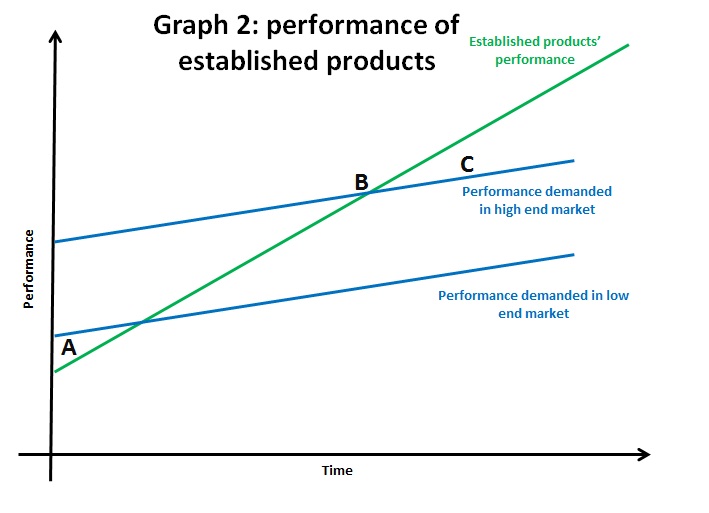 Comments on graph 2 help at anticipating disruptive innovation, as well

There’s only one difference between graph 1 and graph 2 and that’s the green line, which represents established products’ performance over time.

First of all, in point A, when established products performance is below performance demanded in low markets, the really key question is finding a relevant market for an underperforming technology. Successful companies are not those that push their technology in an existing market, with existing customers. For example:

In other words, the key to getting from point A to point B is accepting the technology as it is and finding a market that accepts the technology’s limitations and value its distinct qualities. By marketing the transistor radio to young adults, Sony appealed to new customers and created a new market.

Second of all, in point B, established product performance, having been financed by a new market, new clients and continous R&D investments, is improving significantly. And this constant improvement over time is the result of sustaining innovations, which keep bringing incremental improvements to existing products. For example:

Third of all, in time, established products improve to a point where they exceed performance demanded, in both low end and high end market. For example:

This is critical in understanding the innovator’s dilemma. Clayton Christensen shows that established companies working for mainstream customers always end up to overshooting, over exceeding what their customers want, and, as we shall see, this creates a vacuum a the lower end of the market for potential new entrants. This will be the subject of next week’s post.

Are you seeing similar trends in your industry? Are you able to identify a specific performance criteria which has been improving continuously over time? Are you seeing your company overexceeding what customers want?