Today, I want to show how disruptive innovation goes about killing established companies.

As indicated previously, any market is determined by:

What’s striking is that, in many industries, including, Disk Drives, Automobiles, Education, Software, Steel, Computers, Retail and many more, established product performance improves at a faster rate than market demands. Thus, in time, established companies develop products that overshoot what the market needs. And this creates a vacuum at the low end of the market for a disruptive innovation.

Today, I want to provide more details on how disruptive innovation occurs. To do, I’ll be using the graph below: 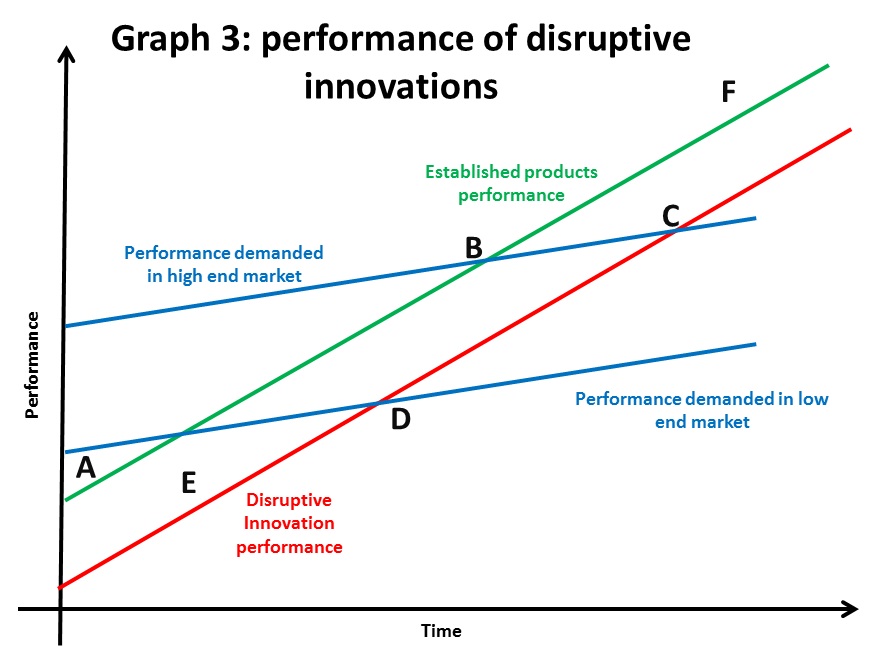 Maybe, cautious parents would be interested in buying a slower car for their growing kids. After all, they may worry that their kids, new to driving, maybe driving too fast, too soon, sometimes, at the cost of their life. They may be interested in buying a slower car; they may also like the fact that the electric is less autonomous than gasoline cars. This could serve as a guarantee that their kids won’t driving out too far.

Similarly, when solid-state drives first came out, they were an under-performing disruptive technology. They could be as much as fifty times more expense and would offer lower memory capacity. However, they offer other advantages, such as:

Anybody working in IT would want to improve solid-state drives, in terms of capacity and costs before including them into new mainstream portable computers, which they would sell to mainstream consumers, like you and me. But, again, that would be a mistake: nobody would ever be willing to buy a more expensive computer that offers less memory capacity. So again, selling disruptive technology to your existing customers in existing markets, is not the right way to go about it.

The key to developing disruptive innovation is finding a market that accepts the technology as it is. As solid-state drive inventors were looking for a new market that would value what their technology could offer (high price, low memory capacity, low energy consumption and high ruggedness), they ended finding a market that was very distant from computers. It was, according to Clayton Christensen, heart monitory devices and cell phones.

In other words the key to harnessing a disruptive innovation is finding a new market for what seems to be an under-performing product. This is very different from what established companies tend to do. Captive of their large customers, they try to improve the disruptive innovation so that it meets performance criteria demanded by their existing clients, in existing markets. In fact, they should try to identify new markets and new clients in which they could incorporate the technology as it is today, with its limitations.

Have you seen other instances where disruptive innovation is killing established companies? How has it happened? What have you learned?